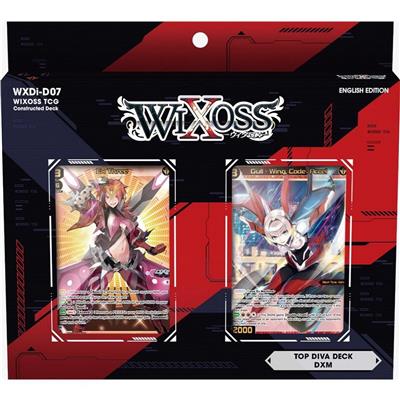 A new WIXOSS ENGLISH EDITION constructed deck will be released with the newest booster pack VERTEX DIVA. It is based on the team of the final boss in the original story called "Deus Ex Machina", and is a very luxurious deck worthy of the name "TOP DIVA DECK".

This deck is a "full spec" deck that includes two PIECE cards. The deck includes frequently used and versatile cards, SIGNI cards that can serve as the foundation for future deck building, and team-only PIECE cards that can become trump cards, allowing you to be at the forefront of battles with just this deck.

To celebrate the release of this deck, a Special Promo Pack vol. DXM with a foil card will be included.
In addition to the three gold letter signed ver of Deus Ex Machina's three Lv.0 LRIGs, two PIECE cards with the same processing as the most luxurious printed version in the Booster Pack are included at a low rate.

-Special Promo Pack vol.DXM is available only for 1st printing.

- Deus Ex Machina is portrayed as the most powerful team and the biggest rival of the main character Hirana and her teammates. The team consists of the youngest Deus, the leader Ex, and the rational Machina, and in this deck, the leader Ex is included as the Center LRIG. They fight using their special ability "Soul" which is exclusive just to them.

-It does not come in displaybox